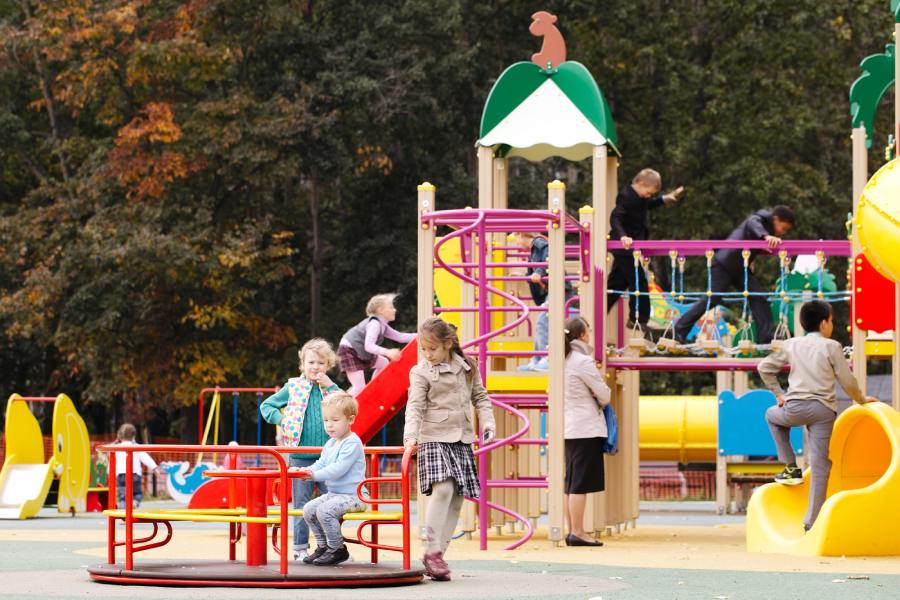 The Origin of Favorite Playground Games for Kids

By TF HarperDecember 21, 2021Playgrounds
No Comments

Children will always find a way to learn, stay active, and be happy. Playing is a natural and enjoyable activity that children quickly defer to when bored. They have a unique way of adapting to any situation or place. If you visit the beach, you will find children playing. So it will be when you visit a school, a playground or a mall. Even in hospitals, you will find children playing while receiving their treatment. Play is essential to a child’s growth and development.

In most cases, you will see children playing a game that you can relate to. You might have played the same game when you were young. Here are some popular playground games and where they came from.

The origin of this game is not clear, but it has been in existence for a long time. In this game someone is chosen to be “It” and the players make a circle around them. The person who is “It” is supposed to throw the ball up in the air and call out a number. The person who has been preassigned that number is supposed to catch it. Everyone scatters while this is being done and when the person whose number was called catches the ball then they are supposed to throw it and try and hit the other players with the ball. If the person with the ball hits another player they get a letter in the word SPUD. If they miss then they get a letter in the word SPUD. Whoever gets all four letters has to sit out for the rest of the game till a winner emerges.

Tag originated from Europe and later moved to Great Britain and USA. Today, Tag has many versions played in different countries. Tag is a simple game. Someone is chosen as “It” and they are supposed to chase all the other players until they can “Tag” one of the other players.

This game originated in Britain during the Roman Empire. Children jump and hop over the scratches on the ground. Traditionally the hopscotch “board” is drawn on the ground with chalk and numbers from one to ten are placed in the boxes. A stone is thrown and the number it lands on is the number that that player has to jump to.

This game originated in Britain and later spread to Canada and Australia. It is a call and response game that can be played with many people. It is a popular one because it doesn’t require any equipment to play. Groups can divide into two teams. The teams will take turns alternating between the team that has their arms linked together forming a chain and a team that tries to break the chain open. The team that has made the chain will then say “Red Rover, Red Rover i call (insert name here) over!” and The person on the other team whose name was called will then run over and try and get through the other team’s interlocked arms.

Red Light Green Light originated in the United Kingdom. This game is familiar and played by kids all over the globe. The only thing that differs is that it’s played in different versions. The players have someone call out the different colors of a traffic light and they are allowed to move across the field when the color is green, if they are still moving when the color turns to red then they are out. The winner is the person who can make it across the field first.

The origin of this game was on the battlefield. However, it is not known precisely where, but it uses the concept of war. The winning team seizes the flag of the defeated team. The idea is that the flag be hidden somewhere where the other team cannot find it. Different versions exist with different rules, but usually the team has to try and get the other teams flag from its hiding place without being tagged by the other team.

Skipping rope was invented in 1600AD. Egyptian girls found it fun to skip rope using vines. Its one of the oldest known play ground games.

The hula hoop was first invinted in Australia and was made of wood. The game was later introduced to California by Melina and Knerr. The modern day plastic version is very popular amongst kids and adults alike.

The game of marbles is also a very old game, with people playing it dating back to when people still lived in caves. They did not have marbles like today, but they used small pebbles. Pebbles were spread out and larger pebbles were used to try and knock the opponent’s pebbles out of the boundary circle drawn around the playing field. The winner knocked all of the opponent’s pebbles out. Modern-day children play this same game but with glass marbles instead.

The Greek philosophers first played jacks during the time of Trojan. This was around 1190BC. Today Jacks are not as popular but they were in the 1950’s and on. Jacks are played with metal jacks and a bouncy rubber ball. The object is to pick up the most jacks while the rubber ball is in the air.

Children first played kickball in Cincinnati in the US. The government later incorporated kickball in public schools as part of physical education. Kickball is very similar to baseball but instead of bats and balls the players use their feet and a rubber kickball.

As the name suggests, the game was established in London. In 1014, Olaf Haraldsson pulled the London Bridge down after an invasion. Children would sing a song and do a dance and fall on the ground.

It was formerly known as box ball in World War I and World War II in the 1920s. People in Auckland were the first to hear of and play foursquare. A box is drawn in the sand or with chalk on the ground. The box is then divided into four squares. Each player stands in their square and bounces the ball into other players’ squares. Similar to table tennis, if the ball enters your square and you don’t successfully get it back into another person’s square, then you are out.

Monkey in the middle

Monkey in the middle was first played in the mid-1980 in England and Australia. It is also known as keep away in some countries. In the US, it is referred to as piggy in the middle.

Games have been around since the dawn of time. This list explores some of the popular games that have existed in recent centuries. Since playing is so important for the development of a child’s mind and creativity and it is cool to know the history and origin of some of the most popular playground games that kids play.